September 22, born to William Archie and Mary Louise in the parsonage next door to the Church of God in Christ in Humboldt, Tennessee, the youngest of six children.

Saved at age 11 during a revival conducted by Elder Johnny Brown at Holy Temple Church of God in Christ in Memphis, Tennessee where his father served as pastor.

Moved with his family to Detroit, Michigan.

Received the Baptism of the Holy Ghost at age 16 at New Jerusalem Church of God in Christ where his father served as pastor.  The Lord called him into gospel ministry one month later.

Licensed by Bishop W. A. Patterson and first sermon preached from text Isaiah 59:9.  His message was titled, “We Wait for Light, But We Walk in Darkness.”

Officially ordained to minister in the church by Bishop J.S. Bailey.

Privilege to preach in the presence of the founder of the Church of God in Christ, Bishop C.H. Mason, on two occasions.

Returned to Memphis, Tennessee to serve as Co-Pastor of Holy Temple Church of God in Christ and to attend LeMoyne-Owen College.

Leads Holy Temple in a three-day and night fast and 30-day tent revival.

Because known as God’s young Apostle because of his gift to lead many to Jesus Christ and gather large crowds.

Along with Sister Patterson establishes the name “Bountiful Blessings” and continues the tent and crusade ministry.

Thousands are in attendance at the various auditoriums where crusades are conducted and where tent meetings are set up.

Membership continues to grow under Apostle Patterson’s ministry and he is led of the Lord to purchase the old Mount Vernon Baptist Church building located at 547 Mississippi Boulevard and this location becomes the downtown branch of the church.

Distinguishes himself as an ardent fighter for human rights and other civil conflicts and becomes a part of the Civil Rights Movement, preaching fervently that love and peace must prevail if America is to survive.

Involved in the strike of 1968 that centered on black sanitation workers in Memphis.

Member of a nine-person strategy committee responsible for bringing Martin Luther King, Jr. to Memphis for march in support of striking sanitation workers.

Mr. Chairman I Nominate Jesus is recorded in Memphis during a live broadcast of the G. E. Patterson Evangelistic Crusade hour.  In this particular infamous sermon that is appropriate for any political season, Apostle Patterson takes a retrospective glance at the political convention of 1968 and nominates Jesus as the only real remedy to cure the ills of our society.

Resigns as Co-Pastor of Holy Temple Church of God in Christ and becomes founder of Bountiful Blessings Deliverance Church, Inc.

During first church service, 436 new members join from every denomination and religious organization in Memphis.

The church membership grows to over 2,000 and additional space is required.  The church is remodeled to help relieve overflow.

The 1,200 seat sanctuary, which was too small from day one, also consistently overflows and requires an even larger building.

During the November meeting the COGIC General Board chaired by Bishop L.H. Ford voted 11 to 0 to allow Gilbert E. Patterson to come back into the active ministry of the Church of God in Christ as a Jurisdictional Bishop in Memphis, Tennessee.

Elected to the General Board of the Church of God in Christ for first four-year term.

Opened the doors of Temple of Deliverance and served free hot meals daily for two years to multiple thousands of people in need in the Mid-South.

Re-Elected to the General Board for a second term after graciously conceding the office of Presiding Bishop to Bishop C. D. Owens.

Contributing writer in the Spirit Filled Life Bible (KJV), which was edited by Dr. Jack Hayford.

Editor and publisher of Bountiful Blessings Magazine with circulation of 100,000.

Temple of Deliverance Cathedral of Bountiful Blessings opens at 369 G. E. Patterson Avenue at a cost of $13 million.

Elected as the presiding Bishop of the Church of God in Christ, becoming the first to unseat a sitting presiding bishop in the denomination’s history.

Featured in the cover story of Charisma Magazine in article titled, “God’s Man in Memphis.”

Founder of COGIC Charities, Inc., the philanthropic arm of the Church of God in Christ, and since its inception has participated in the following humanitarian efforts:

Thousands of bottles of water furnished after the summer 2003 Storm in Memphis, Tennessee along with hot meals and bags of ice.

Provided funds to several organizations for relief efforts after Hurricanes Charley, Rita and Katrina and the tsunami as well as providing awards for educational scholarships and other humanitarian efforts.

Purchases a home for a family who were victims of the Katrina Hurricane.

Elected by acclamation to the office to Presiding Bishop for second four-year term.

Designates January 30th as “We Care Sunday” in COGIC and spearheaded the collection of an international offering of $425,000 for aid in the tsunami relief effort.

Along with the congregation of Temple of Deliverance Cathedral of Bountiful Blessings opened and dedicated the G.E. Patterson Family Life and Youth Center, built at a cost of more than 5 million dollars without securing a bank loan.

His legacy will live on… 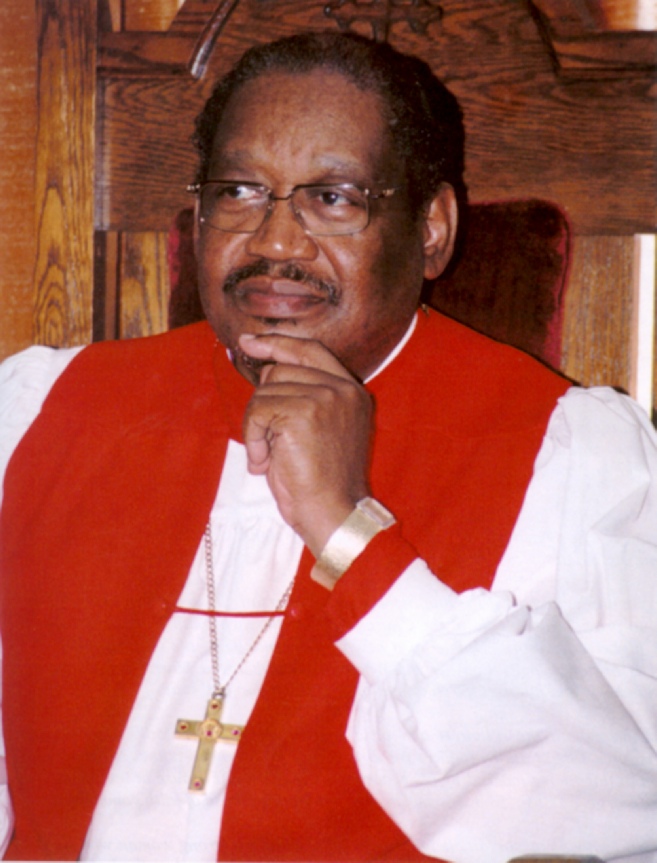