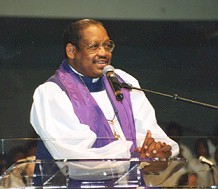 His sermon starts slowly, steadily, like a steam locomotive lumbering out of the station. The tone and pace of his voice are measured so carefully the words seem merely able to crawl out of mouth.
Don't be deceived.  He's warming up - clearing his windpipe, stretching his vocal chords, preparing his voice box to receive and deliver the plain truth, the raw gospel, the inspired, infallible, indestructible word of God. Bishop G. E. Patterson of the Church of God in Christ doesn't come to chat, y'all.  He comes to preach. Gilbert Earl Patterson, 57, just completed his 40th year in the pulpit. tonight at 7, his congregation will honor him at a banquet at The Peabody.  Evangelist T. D. Jakes is the featured speaker.  Patterson is the speaker featured.  His ministry is growing locally and around the world.  He's the only Church of God in Christ preacher with an international TV audience.  BET and TBN cable networks broadcast his sermons weekly.
His 11,400-member congregational fills two sanctuaries each Sunday.  Temple of Deliverance downtown and  Bountiful Blessings in  Whitehaven.  He preaches in one, then the other. This fall, his congregation will begin building a new 4,000-seat sanctuary downtown behind Temple of  Deliverance.
Patterson is serving his second term on COGIC's general board.  Last year, he lost an election for presiding bishop by one vote.  "He wasn't really known outside COGIC until four or five years ago, but since then he's  really come on strong." said Dr. Vinson Synan, Pentecostal historian at  Regents University in Virginia.  "He's one of the best preachers in the world."
Tell Patterson's congregation something they don't know. 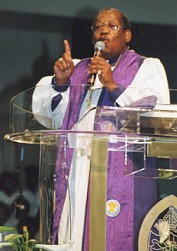 "He's a model for all of us; he makes the gospel so exciting and yet so plain," said Elder Gregory Askew, for 16 years one of Patterson's assistant  pastors.  G. E. Patterson preached his first sermon Jan. 22, 1957.  It was a Tuesday evening at his father's church in Detroit.  He was 17.  "I wasn't nervous about preaching, I was afraid no one would come," Patterson said.  Patterson's father, Bishop W. A. Patterson, was first in a long line of influential Patterson preachers in the Church of God in Christ.  Patterson's uncle, Bishop J. O. Patterson Sr., served as presiding bishop from 1961-1989.  His cousin is Bishop J. O. Patterson Jr. of Memphis, former acting mayor and city council member.
G. E. Patterson was born in Memphis but spent his teen years in Detroit.  He moved back to Memphis in 1962.  He was co-pastor of Holy Temple COGIC on Wilson Street until he left the church in 1975.   Not just that church. The entire denomination.  "We are troubled on every side, yet not distressed."  Bickering among COGIC leaders in the early 1970s nearly split the denomination.  It pushed Patterson away.  In 1975, he founded Temple of Deliverance as an independent Pentecostal church.  He was outside the church for the next 13 years.  He looks at that period of his life as a wilderness.  He no longer had his name, his heritage to lean on.  God was all he had.
"We are perplexed, but not in despair."  Patterson's Bountiful Blessings ministries are booming.  He employs more than 100 people.  His Whitehaven complex houses a preschool, a Bible college, a radio and TV studio, a bookstore and mailroom.  Audio- and videotapes of his sermons sell in the thousands.  He owns a local AM radio station, WBBP-1480.  He has a mailing list of 50,000 worldwide. His voice is heard by millions every week. 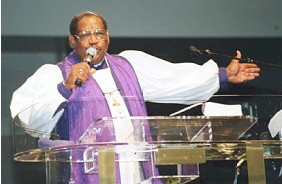 "Persecuted, but not forsaken;  cast down, but not destroyed."  Patterson's voice is his signature.  It's deep, resonant and flexible voice, capable of expressing a wide range of emotions from solemn to sanctified.  His voice has many modes, from talk to preach, from whisper to quiver to sing.  He doesn't read Scripture, he transmits it.  He doesn't carry a tune, he transports it.  His sermons start off low and slow.  He's in no hurry.  He knows where he's going.  The congregation knows he'll get there soon enough.  "You got trouble and despair on the left side of the comma, hope on the right side."  He reads the Bible looking for inspiration.  It always comes.  He finds a verse, then a thought.  The idea grows into a sermon. He delivers the message without notes.  The sermon builds deliberately.  Both hands are on the podium at first.  Then they start moving.  Motion flows from his hands into his arms.  Soon, he's jabbing and grabbing the air, his voice pitching the congregation from side to side.  "I don't know about you, but I'm gonna live life on the positive side, Hello, y'all?"   The sermon rises and falls, then rises again.  The congregation is up and down and up again.  The preacher is picking up steam.  He pulls the microphone out of the stand with one hand, dabs his perspiring forehead with the other.  Near the end he's singing, dancing, running back and forth from side to side.  "Defeat on the left, victory on the right.  Sin on the left, salvation on the right."  Jesus told him no to change the world, but to preach the gospel.  The gospel changes the hearts.  That changes the world.  He gets tired sometimes.  He never tires of preaching.  "Sit down, y'all and let me finish."  They won't sit down.  He isn't finished.

(This article appeared in the April 20, 1997 edition of the Commercial Appeal Newspaper.)